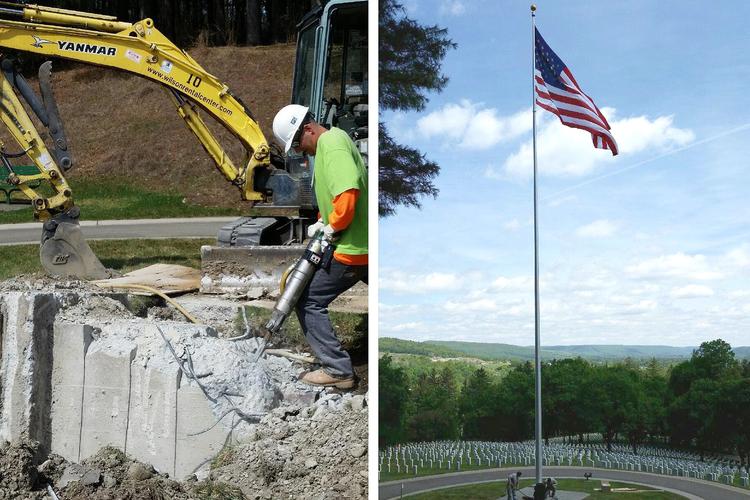 SCOPE OF WORK: Paramount removed the existing flag pole and installed a new 80′ clear-anodized flag pole at the Bath National Cemetery. The PCG Team began with the demolition of the existing sidewalk and concrete surrounding the flag pole in preparation for replacement. Paramount coordinated the mobilization of the crane service for removal of the existing flag pole, took it to Enviro-Metal Recycling and received a recycle certificate to submit to the VA. The concrete foundation was removed and disposed of off-site, and preparation for the new 80’ anodized flag pole was completed. Proper base course was installed and concrete was poured for the flag pole installation.

At Woodlawn National Cemetery, Paramount provided lead-based paint abatement and then painted the existing flag pole, as well as installing 8 new flag pole receivers in the ground for ceremonial purposes. PCG excavated the area to receive new concrete, placed the new base material and sleeves, and poured the concrete for the new flag pole bases. The PCG Team then inserted eight galvanized steel caps into each of the eight newly placed flag sleeves. Previously existing electrical issues were corrected, and lights were replaced for uplighting of the flag poles.